This incredible Britain tour offers you the best of this great land. You'll have amazing experiences and see the fascinating sights as you travel from London to Edinburgh and back to London. History buffs will be delighted in seeing mysterious, prehistoric Stonehenge (just imagine how these stones got there!); the Roman Baths in Bath, constructed around 70 AD and today one of the best preserved Roman remains in the world; medieval market town of Ludlow, perched on a cliff above the river Teme; Edinburgh, home to many Scottish monarchs, including Queen Margaret, who died here in 1093; and York, England's most complete medieval city with its cobbled streets and the magnificent York Minister.

Literary Fans will enjoy visiting Shakespeare's birthplace in Stratford-upon-Avon; Abbotsford House, home of Sir Walter Scott, Grasmere, home to William Wordsworth. But that's not all... our partner, Globus, has also arranged special, out-of-the-ordinary experiences for you. You'll enjoy Grasmere gingerbread, invented in 1856 in the English Lake Districted, and a whisky tasting in Gretna Green.

From historical sights to the beautiful scenery to the special experiences, this Britain tour is a great way to sample what Britain has to offer. 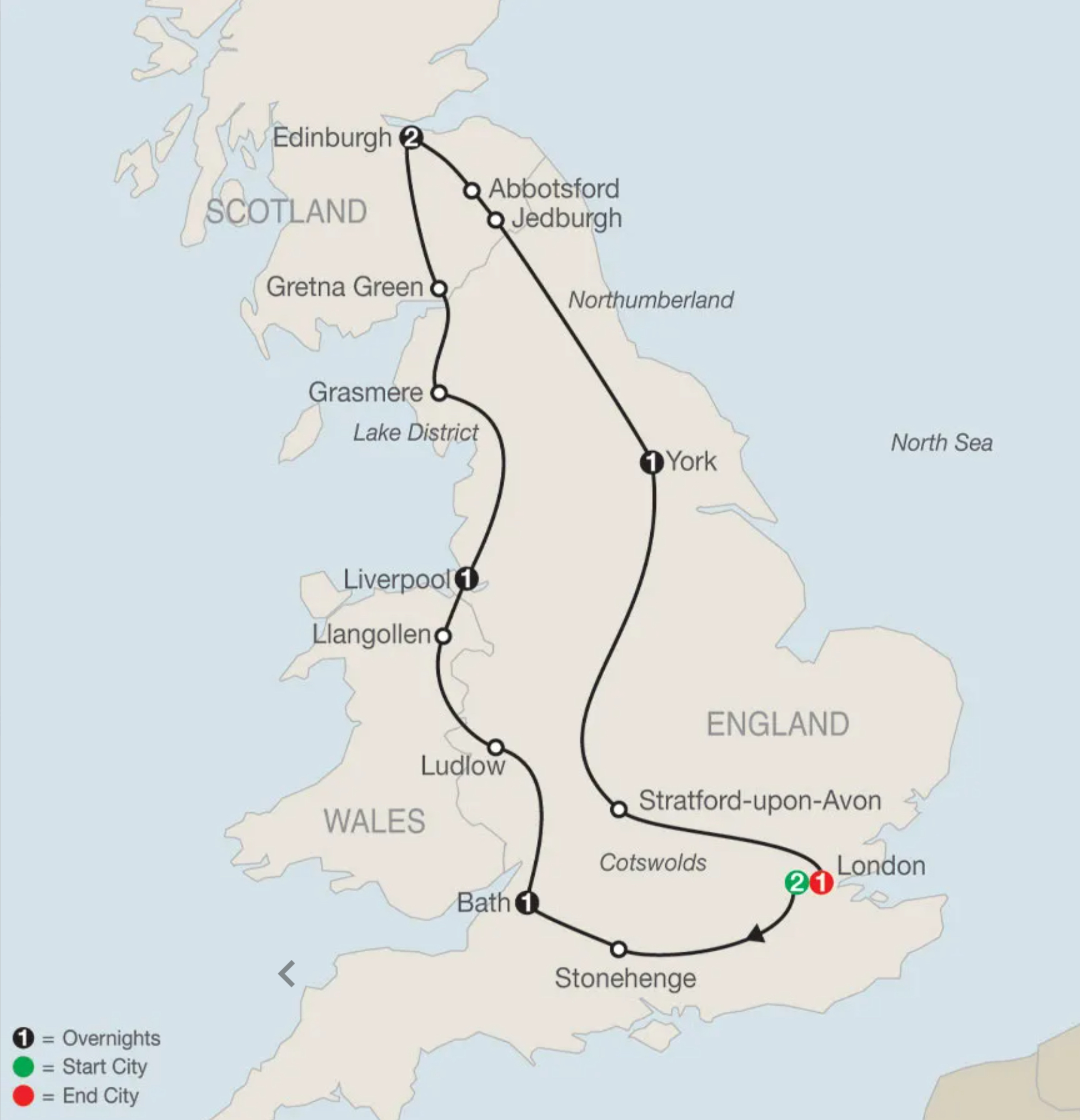 Special Note: You will depart on an overnight flight to London on April 30th, arriving on May 1st to begin your tour.

Welcome to London! Uniformed Globus Hosts are available to help you make the most of your stay.

After a hearty English breakfast, morning sightseeing with a Local Guide includes all the famous landmarks: the Houses of Parliament and Big Ben beside the Thames River, Westminster Abbey, Whitehall’s mounted horseguards and the Prime Minister’s Downing Street residence, Piccadilly Circus, and Buckingham Palace. The highlight is a visit to ST. PAUL’S CATHEDRAL (except on Sundays), Sir Christopher Wren’s masterpiece built between 1675 and 1708. Free time in the afternoon for independent activities or to join an optional excursion to Windsor Castle or the Tower of London with its fabulous Crown Jewels. Later, how about an optional dinner, followed by a cruise on the Thames River?

Meet your Tour Director and traveling companions, and depart at 8 am for a memorable day of sightseeing. First, try to unravel the mystery of prehistoric STONEHENGE. Explore the visitor center with its imaginative exhibitions, then take the shuttle to the stone circle and admire the magnificence of the monument up close. Cross Salisbury Plain and head for the elegant Georgian city of Bath, where you see the amazing excavations of the ROMAN BATHS. You will also have time to explore the town further on your own. Tonight, enjoy a welcome dinner at your hotel.

This morning, drive through the fertile Severn Valley and across unspoiled countryside to the medieval market town of Ludlow, perched on a cliff above the River Teme. The afternoon is dedicated to North Wales. Take a stroll in picturesque Llangollen, host to one of the world’s most colorful annual music festivals, before continuing on to Liverpool, hometown of The Beatles and once the departure port of great transatlantic liners.

Focus on the tranquil Lake District, a UNESCO World Heritage Site. Take a break in Wordsworth’s beloved Grasmere, and try original GRASMERE GINGERBREAD. Then, head north for the Scottish border. On the way through the history-steeped Lowland Hills, stop at Gretna Green and visit THE WHISKY HOUSE where an expert explains the mysteries behind whisky production and lets you taste some well-known malts. In Edinburgh, don’t miss our optional Scottish evening with Highland dancers, bagpipers, and the Ceremony of the Haggis.

Morning city sightseeing with a Local Guide introduces you to the 200-year-old “New Town,” and the famous scientists, inventors, and novelists who lived there. In the “Old Town,” visit EDINBURGH CASTLE to admire Scotland’s Crown Jewels. The afternoon is free to enjoy the Scottish capital at your own pace. Later, a unique optional experience: board the former Royal Yacht Britannia, once the perfect royal residence for glittering state visits and family holidays. Dinner rounds off this optional evening. For departure numbers August 3 through August 24, tickets are included for tonight’s performance of the world-renowned MILITARY TATTOO, a vast spectacle of massed Scottish pipe bands that takes place in an arena on the esplanade of Edinburgh Castle.

First on today’s agenda is a guided tour of Sir Walter Scott’s ABBOTSFORD HOUSE, with its impressive collection of historic relics, weapons, and armor, as well as an extensive library with over 9,000 rare volumes. Melrose Abbey and the ruins at Jedburgh are pointed out on the way to the English border and Northumberland National Park. In York, England’s most complete medieval city, stand in awe in front of the great structure of York Minster, then follow your Tour Director through a maze of quaint streets, including the narrow Shambles.

Depart Yorkshire, setting of author James Herriot’s All Creatures Great and Small, and drive through the richest farmland in Britain. In Stratford-upon-Avon, take pictures of Anne Hathaway’s Cottage and visit SHAKESPEARE’S BIRTHPLACE. Return to London around 3:30 pm. How about a night out on the town with newfound friends? A three-course pre-theater dinner followed by one of London’s West End shows might take your fancy.

Your vacation ends with breakfast this morning.